Here is the all documented, all true, 100% factual, accurate comic book Life Story of Ed “Strangler” Lewis. This story is a real biography of one of the greatest wrestlers ever to step in the ring. Told in the pages of the scholarly publication known as Sports Action Comics #9 and published in 1951 it is most likely this comic book was drawn on scene as these events actually happened. 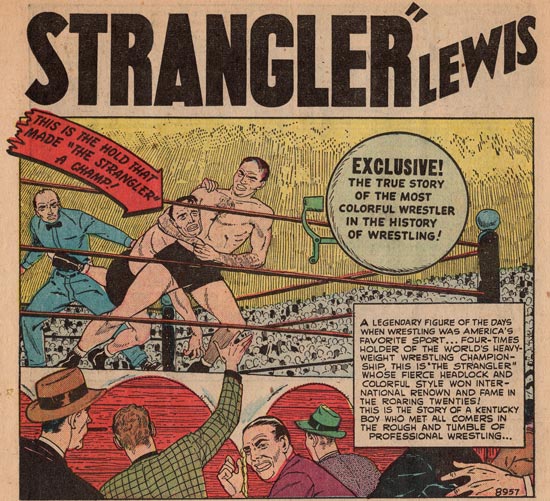 Ed “Strangler” Lewis began as a pro baseball player and instead of going home at night after a full day of playing the most boring sport known to exist Ed would do what all the most intelligent toughest members of society have always done and go watch pro-wrestling. 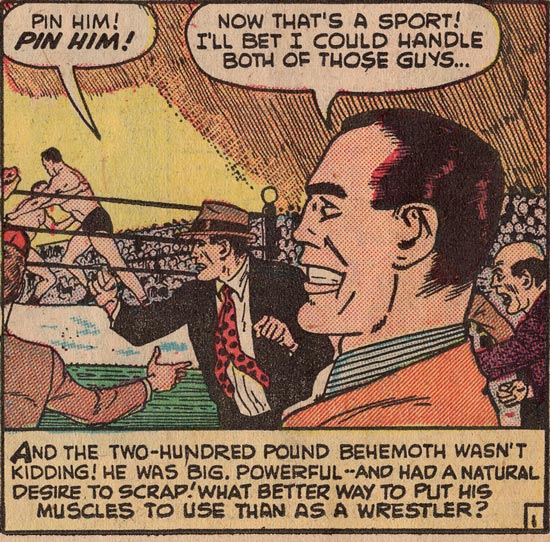 Lewis believed he could beat most of the Wrestlers he watched and so he did what any self respecting athlete would do and left the wussy game of baseball for the real mans sport of Wrestling. At 20 years old Ed Lewis began his career.

To get started Ed Lewis went from town to town wrestling everyone. In no time at all Lewis had wrestled 3,500 matches losing only 12 of them. But even more notorious than Ed Lewis’s winning record was his headlock. Ed Lewis had massive shoulders and once he got a hold of someone's neck he would squeeze it till submission. Earning his name “Strangler!” 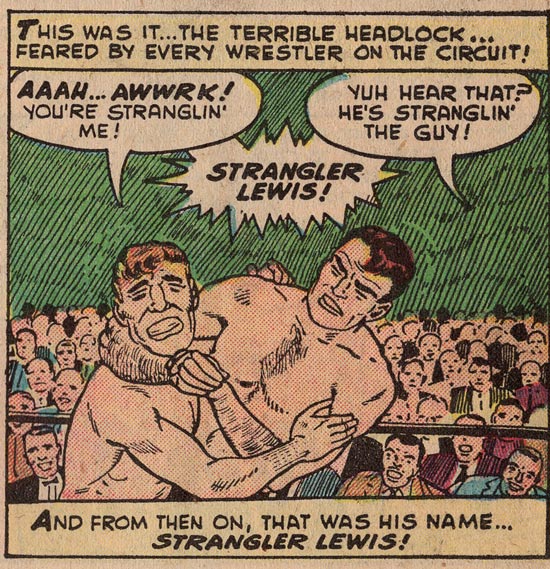 But The “Strangler” didn’t just win because of his natural athletic ability or talent. Ed took his training serious and built a special device to make his headlock ever more powerful! 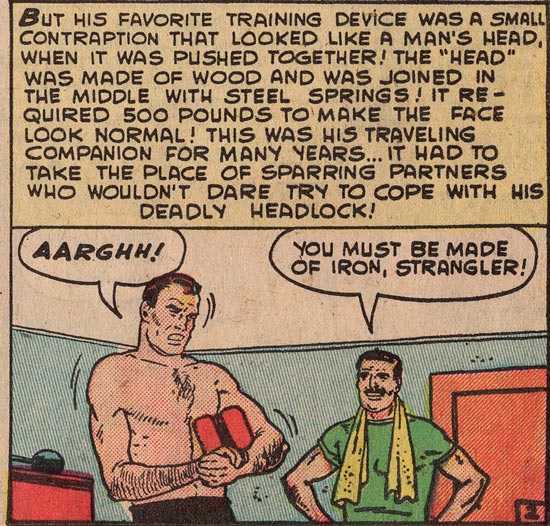 When it came to Jiu-Jitsu Experts The "Strangler" destroyed them all! 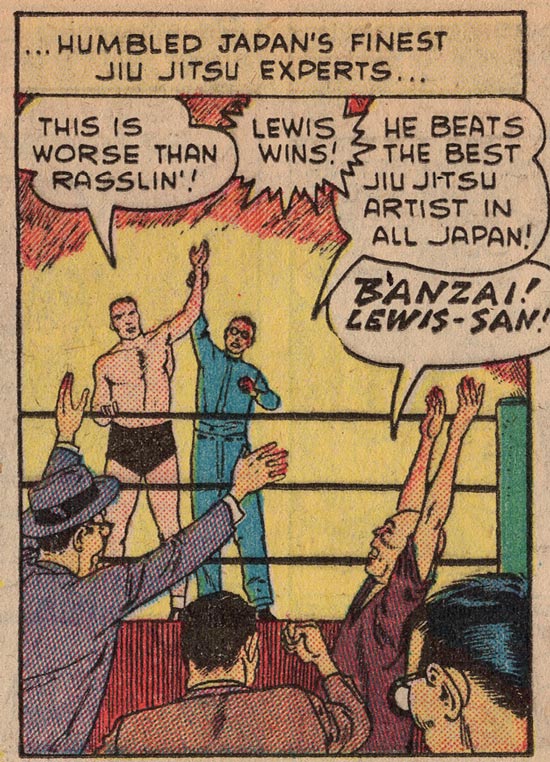 After beating everyone in Japan The “Strangler” went to China and beat everyone there also! 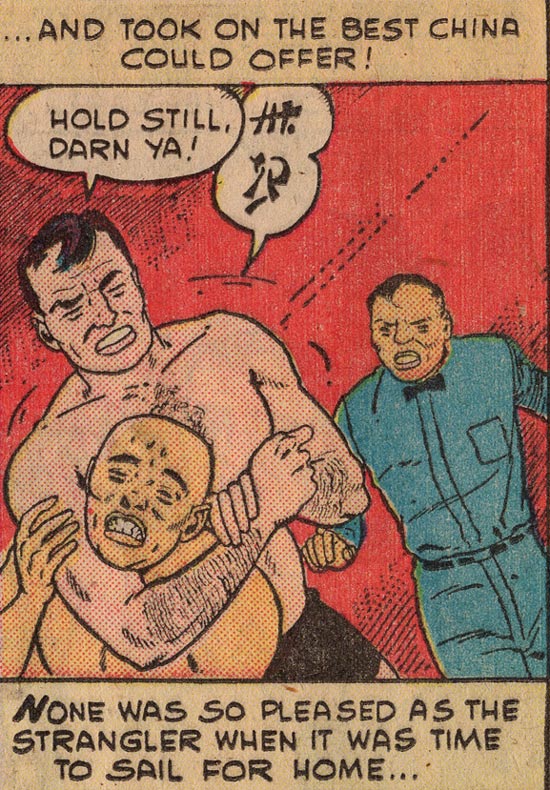 With virtually no one left on the planet to beat Ed “Strangler” Lewis wanted a shot at Jim Londos. Londos was considered not only one of the most popular Wrestlers of the time he was also one of the best looking. 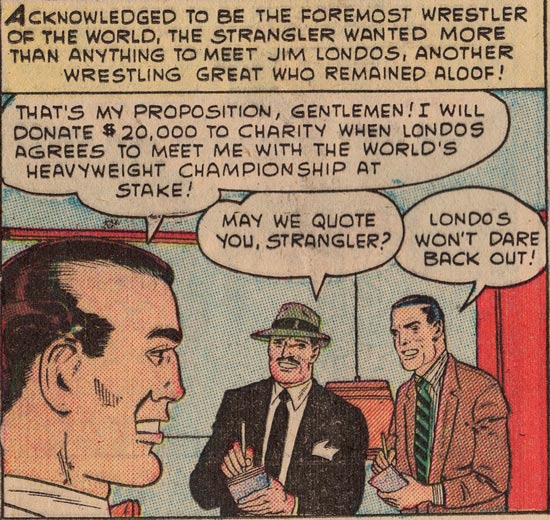 Of course Londos wanted no part of the The “Strangler” and denied him the challenge so Lewis decided to no longer just beat more best wrestlers of his day but to also critically injure them in the process! 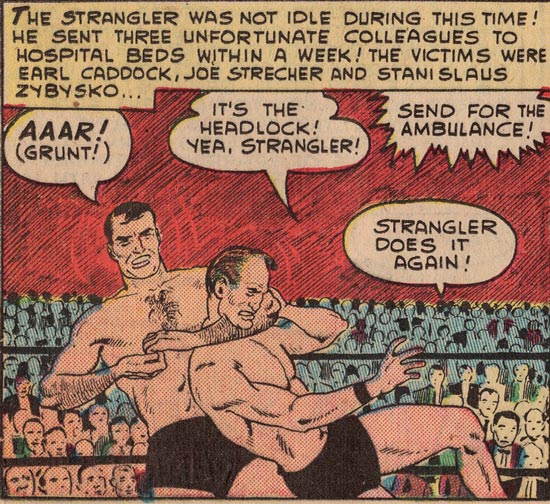 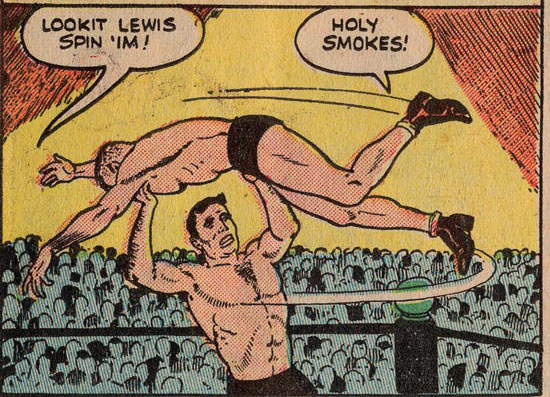 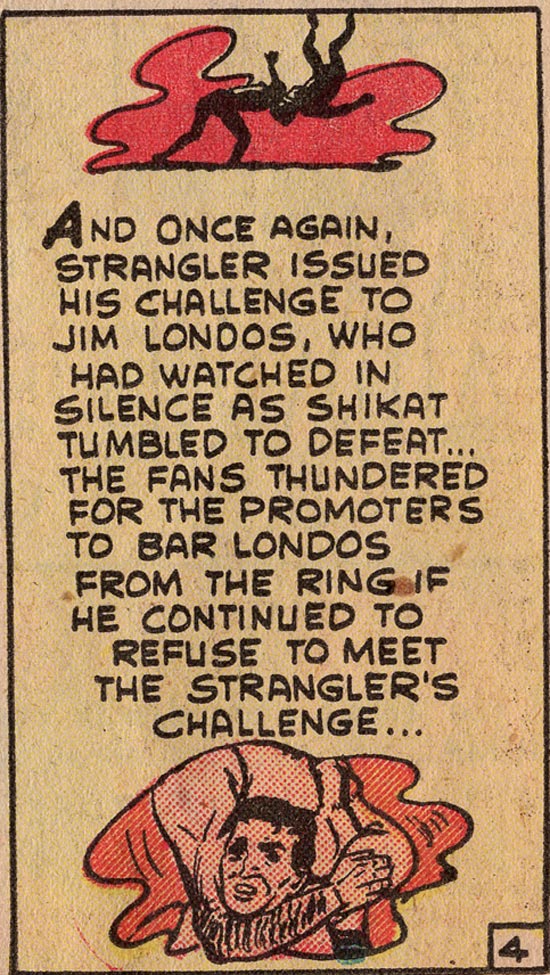 As Lewis aged he continued to wrestle and people began to doubt him and his headlocking. So Lewis took on two challengers in one night beating them both back to back. Let that be a lesson to everyone reading this a good headlock never goes out of style. 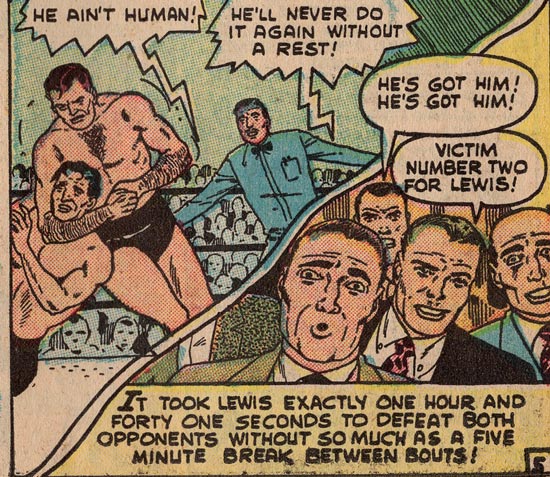 Finally The Ed “Strangler” Lewis got his match with Londos... 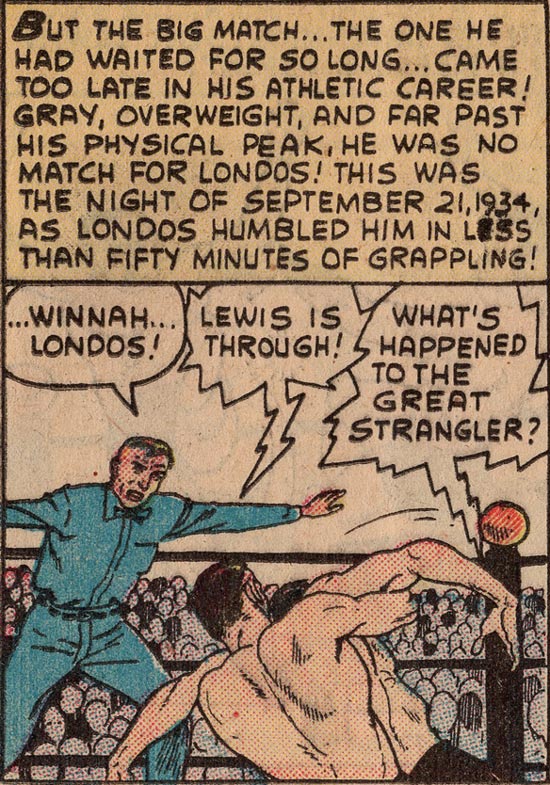 Lewis continued Wrestling into his fifties but as he got older he picked up more and more losses. Finally Lewis decided to leave wrestling as the acrobatics and theatrics of Professional Wrestling had began to become more popular than the tried and true holds of real, legitimate Wrestling. And The “Strangler” disappeared from Wrestling all together. 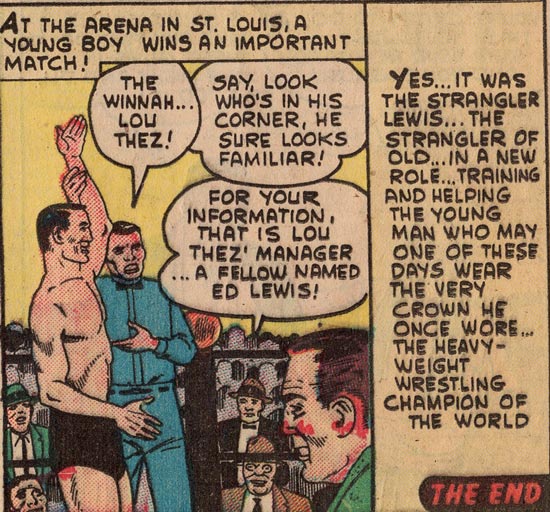 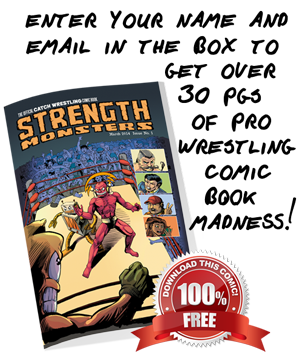 My Encounter With The Heavy Freight Champion 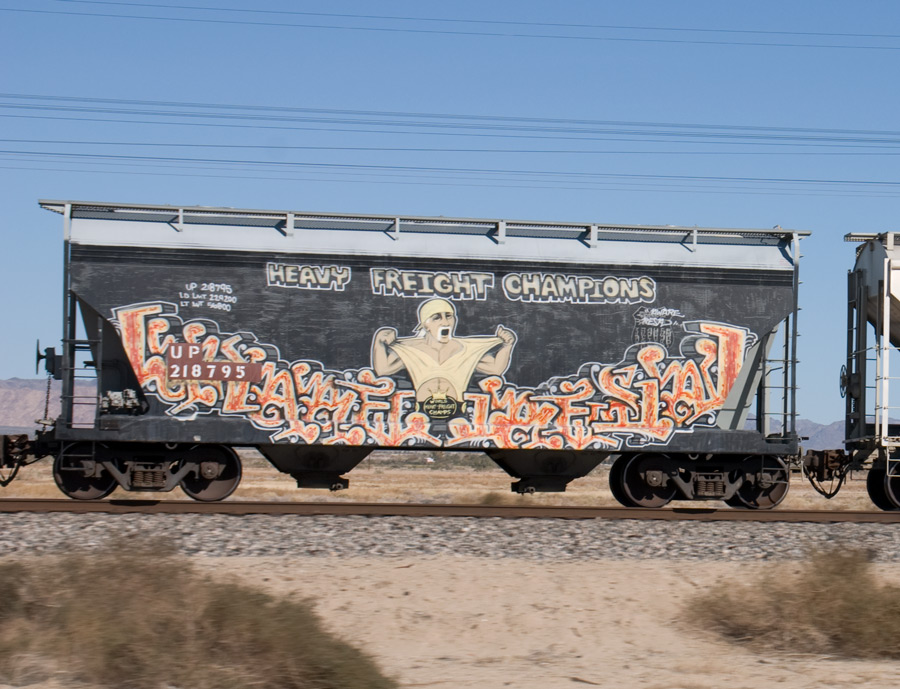 In 2009 and I was driving out in the desert along the East Side of the Salton Sea just south of Palm Springs. What was I doing out there? Checking out a little resort town known as Bombay Beach. Being a person that takes a high amount of interest in a number of obscure things a road trip to Bombay Beach had been on my to do list for some time and it did not disappoint. As I was driving through the desert this train rolled up next to me traveling at nearly the same speed I was and that’s when I saw it. The “Heavy Freight Champions.” I snapped this photo and knew I was on the right track! 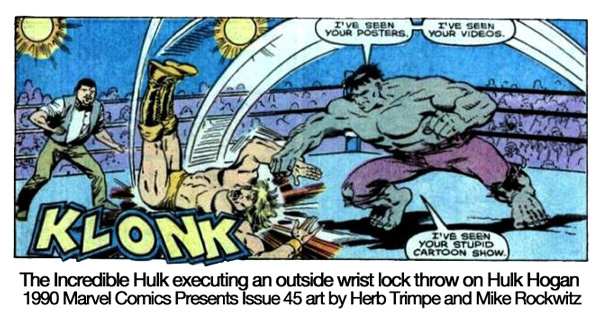 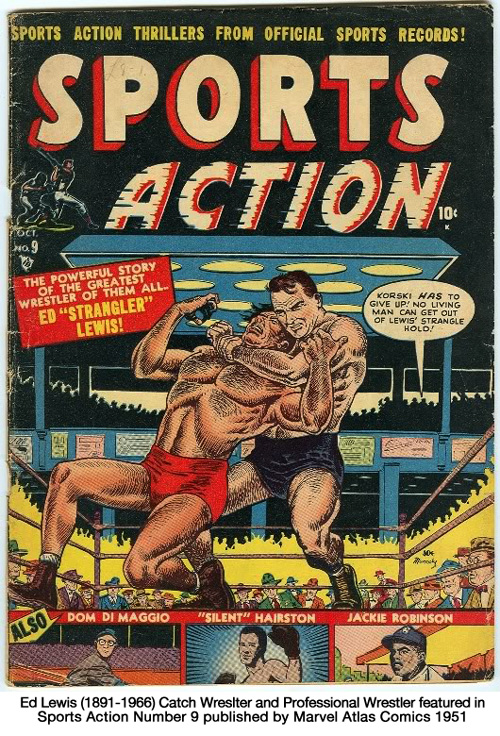 Superman Becomes A Pro Wrestler in The Grappler of Steel!

This story opens with a beautiful Splash page. "The Masked Superman will Wrestle All Comers” a throwback to the old carnival days of Catch Wrestling. 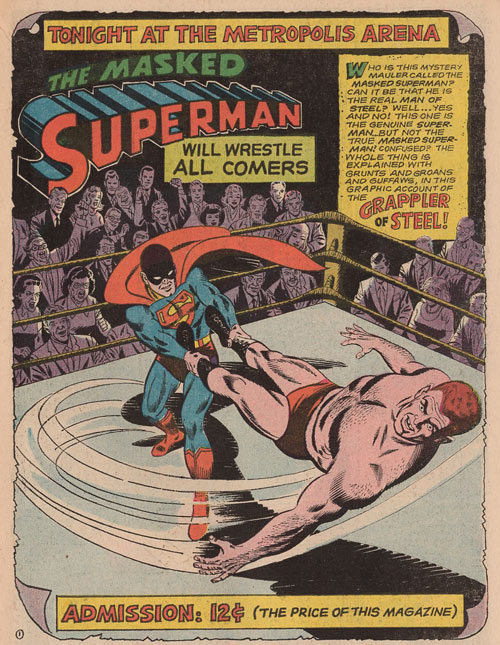 To get the story kicked off Superman can’t remember his other identity as Clark Kent. This is because he was hit with an amnesia ray by a spy who plans on posing as Clark Kent while carrying out missions of espionage. Superman with his memory loss then comes across a newspaper article about a missing masked Pro Wrestling Superman and assumes that must be his other identity. 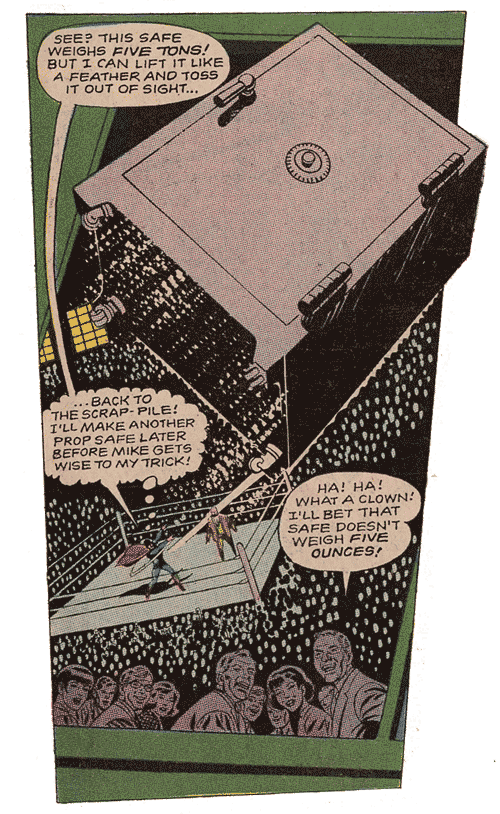 Then he takes a kids Balloon away from him and pops it with the lasers he can blast out of his eyes. But I’m sure it's ok since he's thinking of getting him another one later. 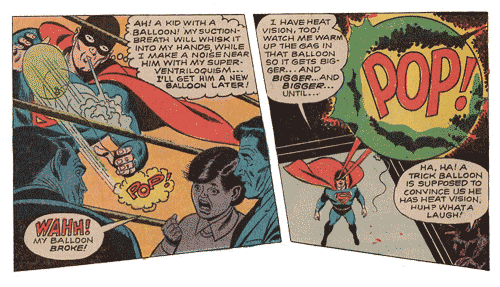 Superman's first match is against a Wrestler going by the name of The Bulldozer.

As The Bulldozer begins working his half nelson Superman counters with a toe hold. 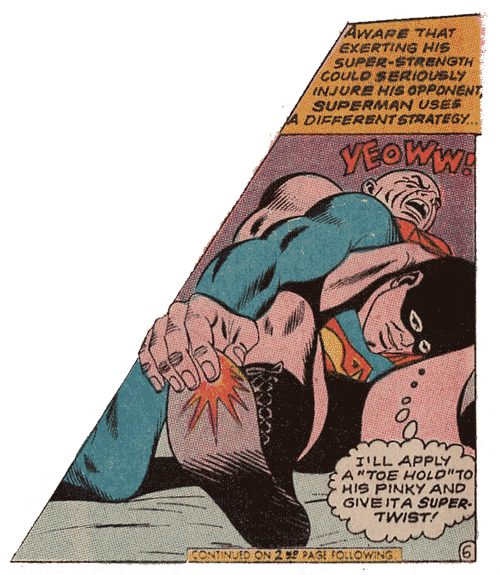 This submission causes The Bulldozer to quickly quit.

After his match Superman retires to the Masked Superman’s locker room where he is confronted by a number of thugs. These men have all placed bets against the Masked Superman and threaten to kill him unless he throws his next match and takes a loss. Of course the real Superman will have none of that.

Minutes later the real Superman is back in the ring as the Masked Superman. Superman takes on the Terrible Tiger and makes easy work of him. Swinging him around by the tail of his costume and throwing him into the gangsters who wanted the match thrown. 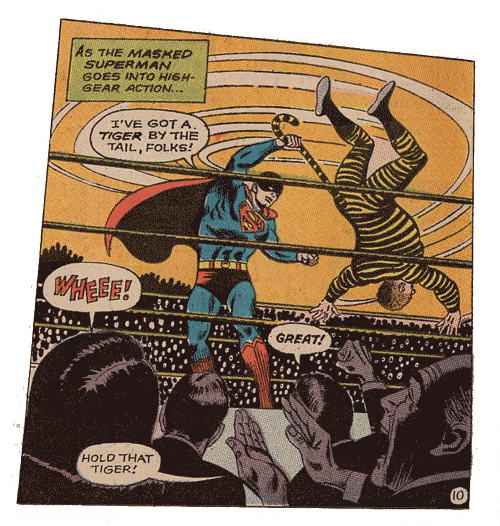 Next Supermantakes on the “Merciless Mauler known as The Killer.” Upon finding out The Killer is also in on throwing the match Superman decides to KILL him by crushing his head with a foot stomp! 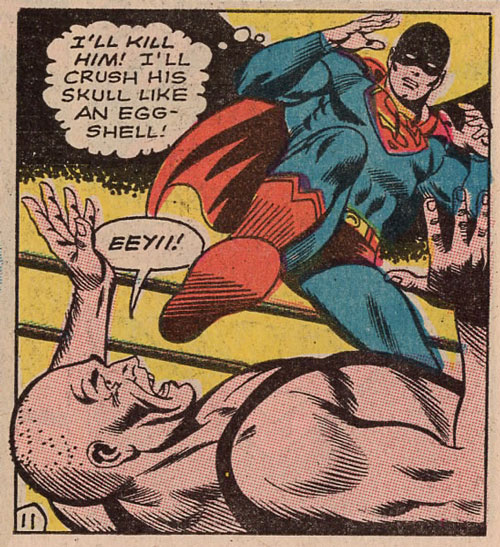 This surge of violence then triggers Superman’s memory and reminds him that he has a code against killing so he opts for the pin.

As the Man of Steel returns to the locker room of the Masked Superman the thugs are waiting to ambush him for not throwing any of the matches. Bullets are fired and Superman is faced with a major dilemma.

If he allows the bullets to hit him and bounce off his chest it will be clear to everyone in the room that the Masked Superman is a Secret Identity of the Real Superman. Not wanting anyone to figure this out. He comes up with an ingenious and fool proof plan. 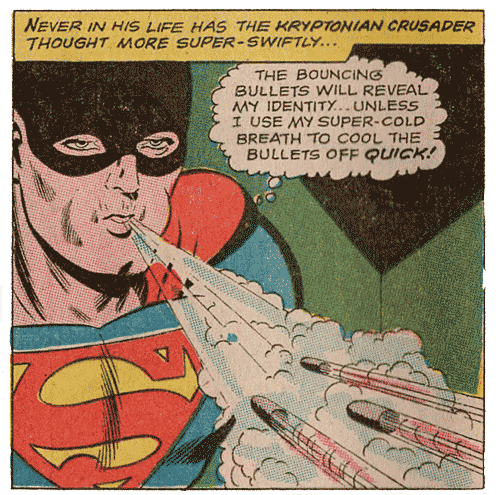 Now that the Bullets are deep frozen they are too brittle and simply shatter when they impact Superman's body.

Superman then goes searching for the Masked Superman and finds him shipwrecked on an island also with Amnesia. In order to restore the Masked Superman’s memory Superman picks him up and flies him up to the cruising altitude of an airplane and then drops him. 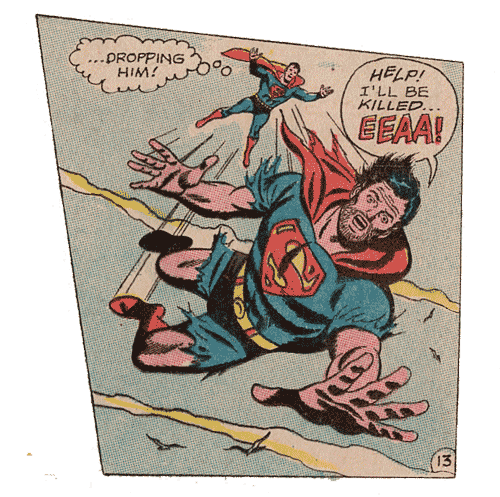 Of course we all know this is one of the most effective means known for treating memory loss and the Shock of the “Death Plunge” restores the Masked Superman’s memory.

The Masked Superman then tries to return the favor and cure Superman’s Amnesia by hitting him over the head with a log. Unfortunately it has no effect on the Man of Steel who still can’t remember anything. So Superman then delivers the Masked Superman back to his manager and the story ends with the Real Superman walking the streets still in search of his other identity.